A winter's day, tea, and a small set of disjointed recollections. Genkai/Yukina, shoujo-ai/yuri/GL/fem-slash. 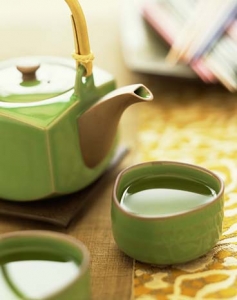 Genkai curled into her meditation pose, the winter sun barely warming her wrinkled face, a bitter wind whistling unnoticed through the eaves of her temple. The powdery covering of snow lay gently over the earth, hushing all noise, making the forest bright and glistening as ivory, the color of the bare branches like paint over the tusks. Ice bent the giant trees, Atlas's curved back, boughs sagging under the weight.

Despite living in a temple, Genkai was not a devout woman. She did service to the Gods as they required, keeping them from interfering too hotly with her lonely life, but there was no one religion she subscribed to; she knew that all holiness was sacred. But for the young boy that broke her solitude and the girl that kept it broken, she felt she might have lost something years ago—perhaps did lose it, but managed to claim it back.

Her little legs remained crossed, back straight, taking deep breaths of the cool air. A hare stirred the brush in front of her, long legs flying as it dove deeper into the forest, where Genkai knew its litter stayed hidden from the area's foxes. Snorting, Genkai thought of Kurama's reaction when he'd watched one of the hare's young be carried away by a rangy renard, fluffed body limp from a snapped neck.

"He must eat somehow," Kurama had told her, with a nonchalant smile.

There was always something about Kurama. Genkai stilled her thoughts with the ease of fifty years' practice.

She roused herself from collecting the stray wisps of power left by her passage of the spirit orb to Yusuke when she heard the unassuming tap of zori to her right, approaching the fusuma. In moments the door, a lattice of paper and thin wood, slid open, Yukina having knelt on one side to perform the proper opening and closing technique, something Genkai had always been too impatient to do when she was young. Genkai wanted to tell her to nevermind that, but refrained—she would be greeted with a soft, confused smile, and then her advice would be ignored.

"Genkai-shihan, I've brought you some tea," Yukina said, her voice sweet and quiet, the most pleasant smile on her face. She pushed the tray forward politely, and gave Genkai a glimpse of one of the scars on her wrists. When they bathed together, Genkai saw more than those small, puckered burn marks. Kuwabara would undoubtedly dig up Tarukane's body and cut it into rotting mincemeat if he knew the number of faults and pains found underneath that pretty blue kimono. Genkai had a feeling Hiei would do more than cut.

"Thank you," Genkai said shortly, her once beautiful face in a soft scowl. Yukina blinked, and made to retreat, taking the tray with her. "Stay," Genkai said softly, reaching for a second mug. "It's too beautiful a day to be inside."

Yukina smiled, and edged closer, tucking a fascinating lock of green hair behind an ear, before getting to her feet and slipping down the steps. Though she wore only tabi and her sandals, she stepped calmly into the thin drifts of snow, which rose and swirled slightly around her ankles, welcoming her. Young-looking eyes that said nothing of ten years of slavery glanced at the ring of trees, and then back to Genkai with another pleasant smile crinkling their edges.

Genkai took the time to pour them some tea, and they drank it, admiring each other's slender wrists. Genkai was shocked when the cool lips, which were only slightly warmer for the hot tea, pressed to her cheek, and then to her forehead.

Kuwabara's heart is destined to break, Genkai thought, and frowned. They sipped their tea as if nothing happened, the steam swallowed by the winter wind—content with each other's company.