The Ring of Mharb - Chapter 1

a story about a dream that i had. it's about a girl traveling back in time to save her cousin. btw, i'm so sorry about the grammar.. english is not my first language~ if you find any errors, please tell me where and how it should be written. please? 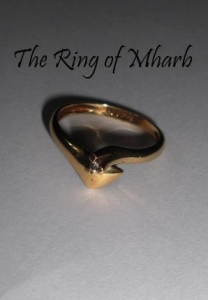 “Don’t be foolish little girl!” hissed a handsome tall man reaching out his hand to a woman.

“Who the hell do you think you are calling me a little girl?!” yelled the woman.

The sky was red, burning ashes in the hot air, and smoke was everywhere. People are running for their lives carrying their children and possessions they can save as far as they can away from their burning homes. Children were crying, horses whining, dogs barking, everyone was in a state of panic except these two people who looks like they’re in their own bubble where there’s no chaos happening.

Her hazel eyes stared at the man for several minutes grasping a ring on her finger real tight. She was sweating in her long off-white night gown and her feet were aching standing barefoot on the hot soil. But despite of the heat and all the hoopla that was going on, the man hasn’t shed a drop of sweat under the heavy garment he was wearing.

“Hand it over and I shall spare your life.” hissed the man again shoving his hand forward taking a few steps towards the woman. She stepped back, making distance, trembling as the man got closer. She held her finger tighter and tighter.

“Never!” shouted the woman. She immediately turned around, reached out her hand towards the blazing fire and said “Herekeht Ferrno!”

And with that the fire parted like the red sea for her to pass. He ran after her making sure that she won’t get away. The fire closed after she passed, he didn’t care. He put his arm in front of his face shielding it with his long red oversized sleeve, his green eyes piercing through it. And though some parts of his clothes were burning he didn’t care. It’s as if he’s immune to hurt and pain. So he chased her throughout the burning village till they reached a dead end.

“Hahahahaha!” the man’s laugh filled the village and silenced the night crickets.

She can’t go anywhere and she was tired of running. There was an awkward silence between them for a moment. There were birds flying just above them and the wind was blowing really fast. He walked towards her, took out his hand and grazed her soft pink lips then stroke her jet black hair. He then said softly “There’s no escaping now Angel. Might as well give up.”

Angel in return ran her fingers through his long black hair, held his head and pulled it close to her slightly teasing the man with aiming her lips onto his, but then turned to his ear and whispered “Want a bet?”

She then took a huge step backwards, raised her hand to the air and the other held her waist. She stared at the ground, mumbled something then suddenly a huge gust of air swirled beneath her feet and started to form a whirlwind around her. And just as the whirlwind covered her face, she winked at the handsome man who just stood there eyes wide open, as he saw her being eaten by the whirlwind she created.

Hell Fever Songfic: The villians of DB/Z/GT have a bad case of Hell Fever.
You... I hate sappy love poems and yet... Here you are. A sad little love poem. Geez, how pathetic am I?