This is about a girl who falls in love with the Anti-Christ, and doesn't realize who he is, until it is too late. 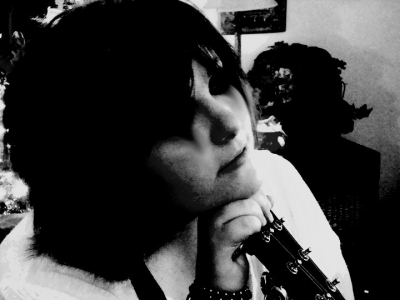 "She didn't forgive me, Sir." the boy said, with a hint of failure in his voice. "Don't worry, my boy. I will get to her." and he laughed. His young butler walked away.

'Come on, I cannot be late! I have the first performance today! No, don't let this happen again!' she yelled at herself.

She made it in five minutes before the third and final bell.

'Thank God.' she thought to herself.

She noticed a new teacher. She sighed as she sat down, looking over her guitar tab for the song she wrote, and the lyrics chart along with it. She noticed she was sitting beside her pianist for this song, and started an 'before class' conversation. We talked about the song, and our performance.

Finally, the third and final bell rang. "Alright, class. Let me introduce myself. I am Leo Hallincar. I will be your new teacher until further notice from the headmaster. Shall we begin?" everyone nodded, and he continued.

"Let's get our first performance today. May Alice Hanibell and Karin Furikuko come up here, please?"

Alice got her guitar, as her accomplice, Karin went to the grand piano in the room. Alice introduced her song, Dark Heart; then Karin started her intro, as did Alice.

Leo began to notice her voice, and how talented she was at so many things. Her voice was the most wide-ranged he had heard in a while, like an angel fallen from heaven.

As they began to finish, her outro was filled with operatic woah's. Finally, an grand ending with a high pitch woah.

Everyone clapped and cheered, including Leo. It seemed, in his eyes. He found the person he was searching for.

After class, he noticed she was on the chart for all of his classes during the day, as a student-teacher in all the other classes.

As they continued the rest of the classes together, he began to wonder how a girl this sweet and humble, cannot forgive someone for their sin. Like someone he used to know.

Pan & Trunks forever together Pan is running off and Trunks is the only one who knows where. What will happen when to kids from...
The House of Water A dream about something not possible...a house made out of water.