This is Stupid - Chapter 1

February 14th. Valentine's Day. Naruto has purchased a gift for his lover, despite the fact that said lover loathes the holiday. Will the gesture blow up in Naruto's face, or will Kakashi appreciate the effort? He didn't know, but he was about to find out. 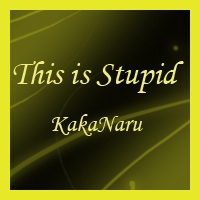 I bring you one of my tamer stories. Hell, who am I kidding? This is practically the only tame thing I've written. XD I posted a journal on Y!gal offering drabbles to the first ten people to comment and prompt me. This was one of them, and it's for my amazing friend, Remmy. I hope you enjoy it, and comments are always appreciated! <3

The day meant for spoiling your significant other. The day when you’re supposed to pamper them and do your damned best to think of and plan some spectacular, romantic gesture.

Completely impossible when your lover was the most unromantic person on the face of the Earth.

Sighing, Naruto paced back and forth through the spacious apartment, a small wrapped box in his hand. His body was already tense, his stomach fluttery with anticipation, nervousness and dread. Giving up, his feet already tired from the countless laps around the room, he flopped down on the couch, covering his eyes with an arm and resting the package on his chest.

He felt like a complete idiot, didn’t understand why he was even going through with it. It was stupid. He wasn’t a romantic, sappy person and neither was his lover. So, why? It had been a total impulse when talking to his uncle one day, and once he’d mentioned it, there was no going back. He just hoped his lover wouldn’t laugh at him.

He must have managed to fall asleep on the plush couch as he startled awake, sitting up when the door to the apartment opened. The small gift fell from his chest, coming to rest in between his body and the couch, hidden from view.

“Hey,” he murmured drowsily, rubbing the sleep from his eyes. “How was work?”

“Same old,” Kakashi shrugged, removing the scarf that was wrapped around his face, obscuring the bottom half of it. He shrugged his winter jacket off and hung it on the peg by the door, slipping his boots off before entering the apartment.

“I um... made supper,” Naruto grinned, a hand moving to rub the back of his head sheepishly.

Kakashi eyed the blond warily before moving to the oven, opening it and peeking inside. It actually smelled good. “How much longer?”

Naruto watched as Kakashi nodded before moving to the washroom. Great, he was moody. Sighing, he pulled himself up from the couch and flicked on the fireplace that was nearby before grabbing a blanket and curling up on the couch. He hid the package in his lap.

When Kakashi entered the living room once more, his gaze raked over the younger blond curled up on the couch. He could tell immediately that something was up. Sighing himself, he took long strides across the room and flopped onto the couch, immediately looping his arm around Naruto’s shoulders and pulling him tight against his side. He smiled softly, his eyes crinkling as he rested his chin amidst blond locks.

“What’s with you?” he murmured, his breath disturbing some of the sunshine hair nestled against his skin.

Naruto silently cursed himself. He had never been able to hide anything from the older man.

“I...I got you something,” he blurted, averting his gaze to the floor nervously.

Frowning, Kakashi pulled back, grasping Naruto’s chin and tilting his head so their eyes met. “Got me something?”

“I know it’s stupid,” Naruto mumbled. “I know you hate this holiday and think it’s fake and everything, but I still got you a present.”

Kakashi chuckled and placed a soft kiss on Naruto’s lips. “Let’s see it.”

Reaching under the blanket, he withdrew the package; a box wrapped in green and blue paper, handing it over. He worried his bottom lip between his teeth as Kakashi began to unwrap it, throwing the wrappings on the floor unceremoniously. His eyes stayed on his lovers face, watching for any reaction.

Long, slim fingers opened the box, carefully removing the object inside. Kakashi’s eyes widened in a way that was almost comical and a gasp escaping him as he stared at the newest volume of Icha Icha that wasn’t due to be released for a few months. His eyes sought Naruto’s as the corners of his mouth lifted in a grin, his eyes crinkling in delight.

“I’m glad you like it,” Naruto grinned back, a small, warm flutter spreading through his chest

“I love it,” Kakashi whispered, pressing his lips against the blonds’. “And I love you, Naruto.”

jump into the dream Asari Kasubi is new at the ninja training hall. she quickly becoms populer and has to train hard...

Vampire Story (book 1) The sun has yet to set, but it doesn't matter. As cloudy as the sky is outside it won't...