Every genre has core elements that make that genre that genre. In order to Cross Genres properly, you need to know each of your genreâ€™s distinctive elements and make them Equally Important in the story. 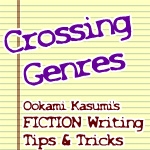 Every genre has core elements that make that genre that genre. In order to Cross Genres properly, you need to know each of your genre’s distinctive elements and make them Equally Important in the story.

One of the most common mistakes I’ve seen in every genre of fiction: IGNORANCE.


Quote:
“Most of the common mistakes come with any writing that isn't so good—bad characters, bad plots, bad writing. The ones which are peculiar to alternate histories (fantasy and sci-fi) are bad research and bad extrapolation.”
-- An Interview with Harry Turtledove

How do you expect to cross genres properly if you don't even know the genres you're working with? Contrary to popular belief, even if you're writing pure Heroic Fantasy, just making it up as you go is NOT good enough!


Quote:
On writing Heroic Fantasy
~~~~~~~~~~~~~~~~
“…The consequence of making that assumption [research is not necessary for a completely made-up world] is, inevitably, a sleazy product. It may be bought by an editor hard up for material, but it will carry none of the conviction, the illusion of reality, which helps make the work … memorable. At best, it will drop into oblivion; at worst, it will stand as an awful example. If our field becomes swamped with this kind of garbage, readers are going to go elsewhere for entertainment and there will be no more…”
-- On Thud and Blunder by Poul Anderson

Genre ignorance is where the author writes a story in a genre they know nothing about.
Examples:

Someone writes a Historical Romance, when they’ve never read any Romances.
This shows up as a beautifully detailed Historical with barely a drop of real Emotional Passion. They would have been better off writing a Historical Adventure.

CLUE: It’s all about the Relationship. Really.

Someone writes an Erotica story, when they’ve never read any real Erotica.
This shows up as a sloppily detailed journal entry written in first person POV, and present tense, with lousy grammar, and no emotional content beyond amazement. Even worse, the descriptions involve actual numbers and letters. "She was 5'6" and a DD." They would have been better off writing a Xenthouse Letter.

Someone writes a Sci-Fi, when they’ve never read any Sci-Fi’s.
This shows up as a beautifully detailed Adventure, with hardly a drop of real Science anywhere. These stories are normally labeled Futuristics, as the only Sci-Fi they have going for them is the Setting. They would have been better off writing a Western, or a High Seas adventure, a historical War story, or just about any other kind of Adventure you can think of.

CLUE: “If you can take the Science out of the Fiction and still have a viable story in another genre, you did it WRONG.” -- Isaac Azimov

Someone writes a Gothic, when they’ve never read any Gothics.
This shows up as a beautifully detailed Romance, with hardly a drop of deep dark Emotional Issues anywhere. They would have been better off writing a Historical Romance.

CLUE: It’s all about the Angst. Really.

Someone writes a Mystery, when they’ve never read any Mysteries.
This shows up as a beautifully detailed Adventure, with a barely real criminal and hardly a drop of a real Investigation anywhere. Or worse, the readers KNOWS “whodunit” by the end of the fourth chapter because the author was foolish enough to give “whodunit”, a Point of View.

HELLO ~ ! The point of a Mystery is to keep the Reader guessing the answer to “whodunit” all the way to The End!

Why? Mystery readers read Mysteries to match their wits against the Author’s. If they guess the answer too quickly, the author has done the worst thing they could possibly do to their reader – DISAPPOINT them. They would have been better off writing a Suspense adventure.

CLUE: The easiest way to keep the reader guessing is by staying in ONE POV from the beginning of the story all the way to the End.


Planning to write a Vampire Romance or Vampire Erotica?

WARNING! ~ Most hard-core vampire readers won’t touch a Vampire Romance or a Paranormal Romance, or a Gothic Romance for that matter, with a 10-foot pole and they're damned choosy with their Vampire Erotica too.

Why not?
~ The Vampire reader is a Purist, and more often than not, Goth. To the hard-core Goth crowd, Vampires are more than mere entertainment they’re an Icon, and very often, represent a personal obsession with DEATH.

To put it bluntly, these readers have read just about everything there is to read about them – fiction and non-fiction, as well as the classic Gothics. These folks have VERY intimate knowledge about anything and everything to do with vampires and Gothics, so it’s blatantly obvious to them, when an author hasn’t done their research on Vampires, or know what Gothics and Horrors are really about.

CLUE: To a vampire obsessed Goth, a vampire has meaning, and ANGST. They want their vampires to be VAMPIRES brooding over the nature of Life and Death, not just a hot guy with Teeth.

On the other hand, the die-hard Romance reader is perfectly happy with a romantically inclined hot guy with Teeth – but you better get the Romance right! Erotica readers are also cool with hot guys (or girls) with teeth, but they're reading to Get-Off, so the characters had not only better be attractive, the sex had better be explicit.

And that’s just Vampires. Fantasy and Science-fiction have their share of fanatical purists too.


The easiest way to FIX the Ignorance problem?
RESEARCH!

There’s no excuse for Lack of Research. If you think the readers won't notice, you are sadly mistaken. I can't tell you how many readers have come to me because they looked up an obscure little fact I tossed into a story and were astonished that I was Accurate. Avoid hate-mail, do your damned research, and do it BEFORE you write.

The advent of the Internet has made looking anything up a freaking breeze. Anything you could possibly want to know is up on somebody’s website somewhere. Google.com is your friend, seriously. USE IT.


"What has all this to do with Crossing Genres?"

Well, before you can combine two genres, you need to KNOW the two genres you're working with because BOTH of them must be equally important in the story to BE a Cross-Genre.


The Rule of Cross Genre Fiction:
~~~~~~~~~~~~~~~~
“When you Cross Genres, if you can take either genres’ identifying elements out of the Fiction and still have a viable story in the genre that’s left – you did it WRONG.”

The Genres
(Broken down to their simplest common denominators)

Okay, there you go. You now know what makes each genre tick. What’s next?

“What if I wanna use two genres from the SAME drive?”
Go ahead, be my guest, but you’re going to find it a little tough to match some of them. On the other hand, the three DRAMA drives work fine paired up with any of the other DRAMA drives. Go figure.

All right, once you’ve picked your two genres, simply use ALL the elements of BOTH and you’ve got a perfect cross genre.

= The Matrix - A Gothic Sci-Fi

Get it? Wanna do it again?

Let’s define Sin City:
Because we used Two Premise driven genres, we ADD the premises together, as well as the circumstances.

Intimate circumstances + Life and death circumstances = Sex and Murder
+
Love issues + despair/madness/hate issues = The insane lengths one will go to when in Love. < -- Premise

Many cross genres are ruled by one genre or the other. It doesn’t have to be that way, but it frequently is. For example, Romance tends to outweigh any other genre its paired with. Why? Publishers' insistence. Romance readers outnumber all other readers ~ EXCEPT Mystery readers!

By the way, the genre Romantic Suspense was originally an attempt to grab some of the Mystery readers. (Increased Readers = Increased Profits) Unfortunately, Mystery readers tend to be Purists. They read Mysteries for the Puzzle the story represents and for no other reason. While they don’t seem to mind a bit of hanky-panky in their stories, they will NOT put up with a story that they can guess in a few chapters, or a story that isn’t actually focused on the Mystery to be solved.

Romantic Suspense failed at grabbing the Mystery readers completely BECAUSE their stories weren’t True Mysteries. See what I mean about Genre Ignorance?

However, adding a PLOT to a Romance made the genre a hit with the Romance readers, who had gotten very, very bored with only Historicals or Contemporaries to read.

Oddly enough, this discovery of adding a fully functional plot to a Romance, plus the rise in interest in Women's Erotica via the "Black Lace" novels and the Red Sage's "Secrets" anthologies, led to the birth of another whole genre:

What made this Genre of Cross-genres so hot a sale? Contrary to popular (Publisher) belief, Romance readers are NOT purists. As long as there’s a sexually-explicit Romance and a vaguely Happy Ending they’ll take any genre it comes in.

In Conclusion...
-- To create a true Cross-Genre, ALL the genres involved must be equally important in the story. However, doing it Wrong doesn’t mean it won’t get published. It just means you “missed the point” of crossing your genres.

I’m firmly of the opinion that if you’re going to do something, do it RIGHT. Why? Because if you do it Wrong, and someone else does it Right, guess who’s gonna grab all the readers?

DISCLAIMER: As with all advice, take what you can use and throw out the rest. As a multi-published author, I have been taught some fairly rigid rules on what is publishable and what is not. If my rather straight-laced (and occasionally snotty,) advice does not suit your creative style, by all means, IGNORE IT.