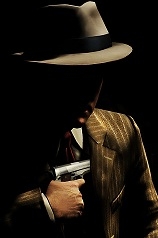 David, who wasn't the kind of person who'd allow himself to be seen driving a car in such bad shape, spent a lot more money than he had initially spent just to fix it up. He hadn't gotten around to upgrading the engine, but he had tweaked a few things here and there so it would run better. Still, it wasn't perfect.

He stepped out of the car and closed the door. He rested his hands on his sides as his eyes shifted to the house. It was large, but not quite large enough to be dubbed a mansion. It looked like it was about three stories high, and it was adequately wide. The windows were tinted, which was strange to David. Only people with something to hide would tint their windows. Or maybe that was David's paranoia talking.

David strolled quietly up to the front door. He raised his hand to knock, but something caught his eye. To the left of the wall was the doorbell, which was covered over with tape. This most likely meant that there was a child in the household. David didn't think the woman he spoke to sounded like a housewife, so he guessed that they had a nanny taking care of the child. He would know soon enough.

It was a woman. She was wearing a tight black dress that David immediately noticed. Her hair was obviously carefully prepared, as was her face which was neatly adorned with makeup. Generally speaking, she was a very beautiful woman. This made David all the more uncomfortable, but he didn't let it show. Instead, he kept a straight, bored look on his face.

"Mr. Sorkin," she said without the slightest hesitation, "please, come in."

David nodded and followed her in. He deterred his eyes from examining the house, for he didn't want to communicate that his house was smaller than hers. It was of course, but giving that away would only damage his pride.

She directed him to an armchair, which he sat in quickly. It was cool and comfortable, he noticed, as he watched her relax in the chair opposite of him.

David watched her closely as she nonchalantly pulled out a cigar and lit it. She placed it to her lips and breathed in. She blew a puff of smoke which rose lazily into the air. She reached into her pocket and pulled out another cigar and held it out to him.

She shrugged and shoved the cigar back down into her pocket. "So, Mr. Sorkin," she began.

David put out his hand. "For now, I'll be asking the questions."

She looked shocked. David assumed it was because no one had ever interrupted her before. She frowned away the expression.

"How do you know I was going to ask a question?"

David gave her a blank stare. He lifted a finger and pointed to her eyes. "You looked away. When people are about to ask awkward questions, they don't look at the person they're asking until they've stated the question. The only thing an asker is interested in is the reaction."

Her frown receded. "I called the right man," she said with a smile.

David blinked. "With all due respect, I haven't agreed to help you find your husband."

She rose her eyebrow, her smile still sitting plainly on her face. "Then why did you agree to come?"

"I like to get to know my client before I agree to help them."

"Smart man," she said, her smile widening. "Or maybe you're just paranoid."

They sat in silence for a moment. Finally, David spoke up. "Never caught your name."

"Gratton Lust. I call him Gratey."

"When did he go missing?"

"Did you call the police?"

She looked at him. "Because he's on the run."

"Because I found out about his gang."

"He's associated with a gang called the LA Street Ninjas. I came home early from work to find him hanging out with some of them. At first, I didn't know they were gangsters. But I figured it out pretty quickly."

"Let's just say that one of them was a loud mouth."

Her eyes shifted from David to the ground. "Because I threatened him."

How I Came To Live Here General, Humor, Original Comics

Jesus And Me Humor, Original Comics

One Piece PETs: Getting a PET Summary: Luffy decides to get a PET into his crew. Takes place post-timeskip. The PETs AU,...
Where I Belong What can I say... another love poem!