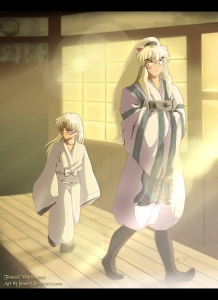 A whiff of smoke was blowing in the damp evening air. The wind took the branches of a large tree overlooking the smokes home, a small human village. The village was starting to die off as many of the occupants began to enter their wooden homes once more for another long night.

Deep in the branches, a figure remained where he was, a Inu ear flicked in irritation as a small leaf brushed up against the skin. The hanyou pushed his back into the base of the tree and ran his claw on the branch he was currently sitting on.

Tapping a claw impatiently on his knee, his golden eyes scorned across the landscape, and eyed a movement near the bushes.

A young girl in the most unusual clothing emerged, her large bag slung over her shoulder. Her raven hair blew in the wind and picked up, she pulled a strand behind her ear and looked up at wordlessly at the hanyou.

Twitching his nose, the hanyou sat against the trunk and grunted, he knew why she was here, to tell him she was leaving for a few days to go take her weird 'egg-sams' thing, or whatever. The hanyou didn't want to argue, every time he did, he was either 'osuwari' or worse scorned in front of the entire village. Interacting with the miko from going to the well was like a stopping a wave that was destined to kill you, this time, he would rather run away from that wave then get blown off his feet from it.

"InuYasha..." The hanyou flicked an ear at the mention of his name. He looked down at the unusual dressed miko, she had sat down on one of the roots of the Goshinboku and was looking up at him with big brown eyes.

"Youre not going to stop me?"

"No," InuYasha grumbled, "It just gives you an excuse to 'osuwari' me."

"InuYasha! That's not true!" The miko huffed. Damn, InuYasha thought, we already are getting into to a fight, and I'm not trying to stop her!

"Go home Kagome! Your just giving me a hard time!" InuYasha snapped. Kagome stopped and stared at him, and her eyes narrowed.

"Well, I see you don't care!" She huffed. InuYasha's ears went back.

"I do!" InuYasha froze, but the words fell out of his mouth before he could stop them. Kagome looked up at him and sighed.

"InuYasha, your still not over Kikyo's death, I'll just go." Kagome slowly turned away and headed into the woods without another word.

"Hey!" InuYasha pulled his ears back. Kikyo...InuYasha thought, the flash of memory hit him like stone, his tears, her tears...

InuYasha shook that thought from his head, he bounded down from the tree and darted after the miko.

"Kagome!" InuYasha jumped in front of her just before she reached the well. "Look, I..."

THUNK! InuYasha whirled around to see a small kitsune pull back another pebble.

"Let her go home InuYasha!" The kitsune child snapped. "I'll hold him off Kagome, while you go for the well!"

"Shippo," Kagome giggled, "InuYasha is being InuYasha, its fine."

"Brat!" InuYasha hissed. He jumped for the kitsune and pounded a good one on the child's head.

"Leaving Kagome-chan?" InuYasha looked up to see Sango and Miroku enter the scene. InuYasha frowned when he noticed the houshi holding his kazaana hand.

"Yes, Sango-chan," Kagome smiled, "I have exams to finish."

"I hope so too." Kagome smiled back.

"Feh." InuYasha sputtered getting off the ground." We still have to defend Kohaku's shard, we don't have time for this!"

"InuYasha, I'll only be gone for a few days, can't you give a girl a break!" Kagome huffed, pulling off her backpack and putting her hands off her hips. "Is that all you care about, Shikon no Tama shards?"

"I..." InuYasha gurgled. "Damn it wench, Naraku is getting stronger by the..."

"Osuwari! And goodbye!" Kagome turned and huffed. InuYasha cursed as his face was planted into the ground once more.

"Bye!" Kagome waved and jumped into the well with a flash of light, she was gone.

"Bitch!" InuYasha spat. Grumbling, he dusted himself off and flung his hair back over his shoulder.

"InuYasha, why do you always have to fight with her?" Sango gave him a look.

"I was trying to avoid it this time!" InuYasha snapped.

"Well, apparently, you didn't do such a good..." Miroku started.

"Finish that, I'll rip your tongue out!" InuYasha said.

"Peace InuYasha," Miroku held up his hands, "I meant no harm."

"Whatever." InuYasha plodded down at the well. "All of you go back to Kohaku and guard the shard."

"Don't say what I have to do to protect my otouto." Sango gave InuYasha a glare. The youkai taijiya stormed away her hands gripping her boomerang and stalked into the woods.

Miroku sighed and shook his head, "You shouldn't mention Kohaku right now InuYasha, you know how much it is effecting Sango."

"Yea, whatever." InuYasha grumbled. "Why don't you leave me alone!"

"Sure, sure." Miroku waved his hand. "Come on Shippo, InuYasha needs time to 'think things over'."

"Why you...!" InuYasha started to stand up, but the two had already had disappeared into the woods. InuYasha hissed and sat back down next to the well. Hoisting Tessaiga over to his other shoulder he leaned back for a relaxing nap when something yellow caught his eye.

InuYasha blinked, it couldn't be...Kagome had left her backpack! InuYasha stood up and grabbed the pack and sniffed it. No hidden Ramen, figures. The women probably had actually gone to go get him more. InuYasha felt his ears droop. If there was no well, there would no Ramen, and no Kagome...

"What the hell is wrong with me?!" InuYasha huffed. Kagome was just a girl, he wasn't...but seeing Kagome's power being stolen by Magatsuhi, he had second thoughts.

"I better return it." InuYasha grumbled. Hoisting the pack over his shoulder and trying Tessaiga to his obi, he grabbed the edge to leap in, but he felt suddenly dizzy.

"What the hell?!" InuYasha sputtered, backing away, but he felt his body being told the well with such great force, his foot slipped pulling him towards the blinding light that was emitting from the well.

"Hey!" InuYasha grabbed the edge, but it went right through his hand he tumbled in, Kagome's backpack following. InuYasha could feel his body get extremely light, but was it his body? Then his world suddenly went black.

"Oh!" Kagome gasped, "I must have forgotten it!" Climbing down the well, the miko snatched her forgotten pack and started to climb back up, little did she know that a hanyou was supposed to be attached to that backpack.

InuYasha woke up, with sounds of battle cries and angry yells all over. He felt dizzy and an exploding pain was erupting from his side, his mind could barely registrar what was going on around him.

InuYasha whirled to hear the voice so close to his ear. He brought up his clawed hand to bat off his attacker, but he felt three sets of hands grab his body and began moving at great speed.

"Let...go of me!" InuYasha hissed. He swung his hand, attacking the closest assailant.

"Tsueesenshi-kun! Don't struggle you'll only..." InuYasha didn't hear the rest of the sentence, his whole world turned black again, but before it did, InuYasha could have sworn a familiar scent was around him, the scent of an Inu youkai.