Imperial Agent Amos Drisriak is traveling alone, far from home and yearning for adventure. He has wandered far from the white sands of his desert home. Our tale begins in the vast temperate region of Kendempolis. Amos soon crosses the path of a red-haired thief his meandering trip homeward becomes a mad dash for freedom. Perhaps he hasn't heard of the saying: 'Be careful what you wish for'? 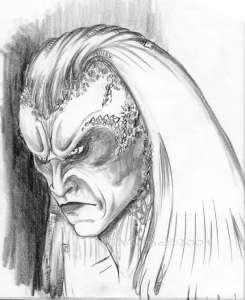 The age old suns of Shen, Daertamese, and it's twin the larger orb, Geroth, rose steadily on the saffron horizon. The light of their dawn weaved its way through out the endless groves of the ancient Gourbossi forest and filled the chill twilight air with its warmth. The thick spicy scent of the fertile earth and the damp leaves newly fallen, wafted skyward. Just beyond the dark, verdant canopy, the land sloped. The foliage thinned and gave way to a vast flaxen grassed valley where massive herds of the majestic three-horned ershuh grazed. The kla-na grass rippled under a morning breeze.
The valley spanned broadly along the edge of the great forest. The land, to the north pitched and seemed to buckle as ones gaze followed it away from the earth. The impenetrable Telest mountain peaks were Shen's great wall. The jagged, granite spires shot beyond comprehension in to a world perpetually veiled my stormy clouds and mysterious fog. Chill breathes escaped those noteworthy peaks and disturbed the morning mists.
Regarding this grand scene was a lone, cloaked rider. Perched upon his reptilian steed he watched from a craggy bluff, as the wind laped at his heavy black cloak. He stared in to the glaring eyes of the suns, relishing the warmth respite from the previous bitter cold night. Amos Drisriak, Imperial Agent of the Kushadian Empire had neither crusade or perilous journey to forsake. It was not riches or plunder that brought him to these lands. It was solely unpretentious leisure. It was a chance to dismiss himself from the encompassing hand of his Empire.
Since his momentous step in to manhood, he had lived the unpredictable and dangerous life of an Imperial Agent. He related only to his superiors, the shrouded dominators of the Imperial Agency. Amos had little or no time for himself. He had last seen his family just before entering the rigorous training of the Agency as a youth. He had neither mate nor child. He was an Agent of low rank, and those were privileges to be earned.
The Kushadian, his people, the glorious Children of the Dragon, were rotting from with in. The ancient Dragon Lords would frown, Amos pondered, upon seeing the so called glory of the Empire. Amos believed that the Dragon's did not intend to conquer this world. They wished to nurture it, like a child. But there were those who would argue with such ardent sentiment. The Kushadian were born warriors, forged by the very Dragon's themselves to massacre, and ravage their enemies. How else are the children of the mighty Dragon Lords supposed to behave?
Amos was one among many. Who would care to notice that the most powerful Empire on Shen was crumbling? His voice, his concern, would be over looked, scoffed by the countless millions of Imperial citizens protected behind the preverbial iron wall of fear and hatred toward the Kushadian people.  Amos scolded himself in his moment of doubt. And what of my unrest? Does it matter what I think? I can not change the course of the Empire!
Amos caught the tawny light of the sun rise in his intense gray eyes. He glared in to the warm light unblinking. He wanted away from that world. Amos glanced down in to the lush valley at the large heard of ershuh. Their uninhibited ambling had drawn them closer to him since the brother-suns had risen. A dark shape flew overhead. Amos' saurian runner beast glanced skyward with a curious bulbous green eye. The giant mountain sevel flew high above, it's massive feathered wings guiding its hulk out over the valley. Its resounding shriek echoed in the pitted rocky foot hills. Amos watched the large bird climb high, admiring its freedom, power and grace. The runner beast yawned, exposing needle sharp fangs, unimpressed by the giant bird of prey. Amos felt a chill wind pass him by. He inhaled the air, smelling the pungent wild flowers far below, the great pines of the Gourbossi, and something else.Amos paused in reflection. The agent sensed something more. He felt a great calmness about him. He stared across the valley towards the radiant horizon.
Amos pulled his steed reins and lead the beast towards the valley below. The runner-beast nimbly picked its way down the rock strewn terrain. Once upon the grass valley floor, the Gourbossi forest stood ominously before him. He knew that his time in this place, this place of freedom, was short lived. He would eventually have to return home, to his Empire. He stared in to the dark depths of the Gourbossi in silence. An excitement swelled in his chest. It was a sensation that surprised him. He would return home, but not now. His adventure was about to begin. The agent spurred his steed to a powerful gallop and disappeared in to the shrouded rim of the dark wood.