That's what you get - Chapter 1

That's what you get

Harry and Severus' adventures on the star ship enterpise

Chapter 1, In the Brig 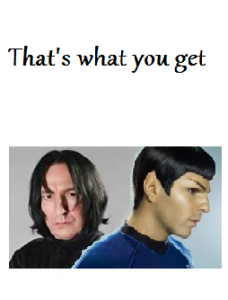 Totally Inspire by Dreamwind1 and her fic The Ark and The Desert on FF.net! If you read it, maybe she’ll update!

“Just a dream.” A boy sobbed, curled next to the veil. “Just a dream, it will all go away soon.”

Green eyes darted up. “Professor!” He threw himself at the Potions Master. “Please tell me it’s a dream. Tell me I’ll wake up and everything will be better.”

“Oh, Harry.” The man wrapped his arms around the frightened teen. “I’m so sorry.” Dark eyes were drawn to the fluttering curtain. “Everything will be ok now.”

“No, it won’t.” Harry whispered, burring himself deeper into the dark robes.

“Sleep.” Severus Snape whispered. “It will be.”

The two sat, the only sound their breath and the gentle whisper of voices barely to be heard. As soon as the man knew his young charge was deeply asleep, he gathered the boy tightly in his arms and stepped through the Veil.

Spock glancedinquisitivelyat the two humanoids that had been brought upon the Starship.

“Is this necessary?” The taller near growled at Captain Kirk as he hid his young behind him.

“Planet CKGB-17 is uninhabited.” Kirk informed him, quite seriously if the Vulcan did say so himself. “The Federation has classified it as hostile and unsuitable for human life.”

“Well it seems your Federation got it wrong.” The man said. “Now, return us to our home, if you please.”

Spock was impressed; he never seen that particular shade of puce to appear around the captain’s nose and ears. Perhaps a visit to Dr. McCoy was in order?

“Put them in the Brig.” Kirk near snarled at the officer standing off to one side.

“Separate or together, sir?”

Something akin to fear filled the young man’s eyes and he grabbed hold on his Sire’s clothing, making a sound likened to a wounded animal.

“Touch him and you will lose the offending appendage.”  The dark man growled again, placing himself between the child and their captors.

“Just get them out of my sight!” Kirk shouted, causing the boy to whimper.

Spock watched with some concern as the prisoners were led away, his friend and Captain turned yet another shade.

“Should I call Dr. McCoy?” Spock frowned. “I’m afraid you may pop a blood vessel if you continue much longer.”

“Forget it.” Kirk muttered. “Find out why that planet is X-listed.” He ordered before stocking out of Transporter Room.

Severus sneered at the proffered meal of sludge. “Are we sickly to be offered gruel?” He asked the man. “Take it to your Captain and tell him we’ll have none of it.”

The crewman rolled his and walked away.

Harry whimpered and tapped two fingers together at his throat.

“Because that is how Muggles deal with things that are unknown to them. They cage it.”

“The boy is either deaf or mute.” Dr. McCoy, or Bones as he was known amongst the crew, reported to Captain Kirk and First Officer Spock. “Giving how he reacted in the Transportation Bay, I would say Mute. I would also say that whatever caused it, happened within the last 3-5 years. Perhaps even more recently than that, if he learned Sign Language beforehand.” He handed over a file. “I can see no physical injuries on either other than old scars. The older man is very protective.”

“Let’s just say I nearly had to reattach Edmundson’s fingers.” Bones looked ruffled. “Stunners don’t work long on them; the man 10 minutes the boy 15. But we have been able to glean some knowledge from them in that brief amount of time. The boy is roughly 17 years of age, and has serious marks of neglect.”

Spock frowned. “His Sire does not seem the type to be neglectful.”

“Ah, but the man isn’t his father. At least not biologically. He also shows signs of neglect at a young age. Best guess? The man took the boy to get away from whoever was roughing him. I would say the boy’s developed Stockholm Syndrome.”

“Neither is in the Federation System.” Lt. Uhura reported. “And I’ve run everything going back 10 years.”

“Perhaps it is time to speak with our prisoners then?” Spock interjected.

Kirk snorted. “Talk, right. And how do you propose we do this? The guy has threated –and enacted- physical harm on my crew.”

“We be straightforward.” Spock turned on his heel and made his way down to the Brig, several members of the crew following bemusedly.

The half-Vulcan found the two in the first cell. “Excuse me; I would be most grateful if you would answer some questions we have. Doing so will enable us to process your case quickly and efficiently.”

“The day a governing body does something quickly and efficiently is the day the monkeys learn to swim and fish walk on land.” Black eyes glared at him from the cornor the two had taken residence in. “Now be quite, all your poking and prodding has caused unneeded stress on my charge and he is in need of rest. Begon brigand and take the fallowing of fools with you.”

“Brigand: A bandit, one of a band of robbers in mountain or forest regions. From the Middle English briga meaning member of an armed company. I fail to see where this in anyway is partial to me.” Spock frowned. “As for the ‘fallowing of fools’ I must admit you have a point there, but I have no knowledge of how you would be privy to this information.”

“You attack us unprovoked, remove us from our home and ask why I call you a Brigand?” The man snorted. “As for your fools, I call them such because they gather outside the door like so many giggling school girls, hanging on the every word of a favored professor.”

“Our attack was not unprovoked. You were on a planet deemed uninhabitable by the United Federation of Planets due to its long term effects from toxic gases released by several native plants and oversized arthropods*.”

“Both of which are easily avoided.” The man said matter of factly.

Spock was dumb struck. “How?”

“The gases are avoided by wearing a breathing aperatice, which was stolen from us at the time of our captor. Also, beneth the jungle is perfectly clean air.”

“But several men were attacked at random –“

“Only if you attempt to damage the forests in anyway.”

“Aren’t they getting off topic?” Uhura whispered to someone from the door way.

“We are.” The half-Vulcan straitened. “Please state your name and that of your young captive.”

“Captive?” The man snorted, then roared with laughter, waking the young man.

The boy looked at his companion, then to Spock and back to his companion. Frowning he made a sign with his hands, which Spock noted was him bringing up his hands to shoulder length and pinching his index and thumb together.

“This being believes you are my captive.” The older male gasped out before laughing again.

After several minutes, the man took a deep breath and calmed himself. “Thank you. It has been many years since I have laughed so hard.”

The boy signed again. This time involving his face.

“But not to the point of pain, child.” He patted the boy gently on the head before turning back to Spock, strait faced. “The child is not my captive. He is more of a bur.”

Spock frowned. “Bur: a rough, prickly case around the seeds of certain plants. Again I fail to see the significance.”

“Many burs adhere to clothing and are difficult to remove.” The man frowned. “We are getting off topic again.”

“Will you please stop interjecting –“

“He wants your name, clueless.” Kirk muttered from the other side of the door.

“Oh.” He could feel a headache building behind his eye. “I am First Officer Spock.”

“You may call me Professor Snape.”

“Snape? How would you even spell that?” Uhura muttered.

“And what are you Professor of?” Spock interjected before the others could carry on.

“A lost art.” Snape smirked. “Something I doubt you have any knowledge on.”

“You would be surprised of what my knowledge consists of.”

“Was that an innuendo?” Kirk asked surprised. “Spock just made a sexual innuendo, dear god!”

“Indeed. But I’m afraid I’m still not going to tell you.”

“Very well, what is your companion’s name?”

“He is un able to answer? You have not said a word to him.”

“But I am quite capable of using reasoning.”

The boy in question sat on the floor watching with fascination at the conversation happening between the two men.

“Is that you are ashamed of your inability to communicate with someone and are therefore are ignoring basic manners of which you are more than likely accustom to.”

“My manners have nothing to do with the fact that your companion cannot speak and as such cannot tell me his name.”

“Your manors have a great deal to do with it!” Snape insisted. “If you had any manors what so ever, you would ask my companion his name and ask me to translate for you.”

The boy tugged on Snape’s sleeve to get his attention. The two signs consisted of a tap across on hand’s open palm with the side of the other hand and one hand being shaken with the pinkie and thumb extended.

“I am not playing. Is it too much to ask for a few manners after the manner in which we have been treated?”

The boy looked at his companion with a raised eyebrow.

“Oh very well, ruin my fun.” Black eyes turned back to the Vulcan. “His name is Harry.”

“You would think this would get old.” Dr. McCoy chuckled as he watched the two dark haired figures argue in the middle of the mess hall.

His dinner companion snorted into his dinner and continued eating.

“I told you that you had to add the Muldularia Blood first!” Severus Snape snapped at his partner.

“But it would make sense to add Rudanea Root first.”

“Not if you’re trying to counter act the Powdered Creneo Horn!”

Bones looked at Harry. “You need to get the captain to give you your own room.”

Harry signed. I’d settle for a bunk with Scotty.

You think this is the only time he yells?

*Yes I totally stole Naussica: of the valley of the Wind

OK so with the murdering of stories on FF.net, I've had to find alternet means of pulication. I've been posting pictures here for about a year so i thought I'd see what the fanfic base was like. I've still got it up on FF.net but just in case.