The story follows Gray Carmelita, a young woman who finds out she has the ability to see peoples secrets, supernatural forces ect. All it takes is focus. - you are reading the prelude. - Chapter Zero - "Beyond Everything" 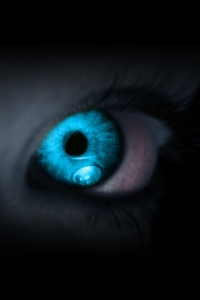 An eerie gust of wind sent chills through Sam’s body, he felt cold, unsure of what was going to happen next. A small amount of mist begun to rise from the ground below his feet.

Sam, scared and confused stepped back, took a breath and in deep despair watched as the mist grew and rose quicker.

A soft whisper came out of the fog as a body figure begun to form.

There she was, a beautiful, stunning and glamorous woman stood before Sam, wearing only a see through red dress, and nothing on her feet, except a black chain anklet. His eyes so big they felt they were about to burst.

“Why wont you leave me alone?” Sam shouted confused.

“You don’t understand, I’m here for you.” She whispered elegantly.

Sam, still stumbling around confused, begun stroking his hair and pacing in disbelief. His mind pounding, his heart racing. What did she mean she was here for him?  Was it someone he knows, but might have forgot? So many thoughts were running through Sam’s mind, tears running down his face. He was scared; he had never been so scared in his life.

Still standing, the woman told him to take a breath. Glancing at her soft and pale face, Sam did as she asked, although the sigh of relief only lasted a second when he realized that her feet were not on the ground.

Finding it hard to breath, Sam still managed to raise his voice.

Sam finished, gazing in her eyes awaiting a reply.

It felt like hours had past, Sam still confused about everything. Nothing at all made sense in his eyes, The Silence continued to endure.

Just before he went to raise his voice, wanting to scream the same question over and over again. Her mouth opened wide.

“Sam, I’m here for you. Think about it for a second.” she whispered as her breath turned into icy cold mist.

“It doesn’t make any sense! What the hell does that mean?

You’re here for me? Who the hell are you.”  Sam shouted.

The woman persisted to gaze into his eyes, not even blinking continuing to say.

Although it seemed like she was getting frustrated, her voice continued to remain calm.

Sam’s heart was racing; his thoughts couldn’t seem to slow down. So much anger, so much hate, so much confusion. Nothing seemed real anymore, an idea of who this woman might be popped into Sam’s head.

“Ah Sam, Need only you worry about what I’m telling you be the main thing on your mind. The Rest will all come in good time.” She giggled.

His heart pounding, a white light glaring from the darkened sky begun to emerge.

“I think I know who, what you are?” Sam whispered as he slowly fell to the ground.

The grass, so cold, the calmness in the air begun to suffocate Sam.

Tears begun to fall from the woman’s face. Although she was sad, she didn’t help, she didn’t interfere with what was happening to Sam, She just cried, and remained innocent.

“I’m not an Angel of Death Sam.” She whispered.

“Then what are you?” Sam shouted with what small amount of breath he had left.

Silence, Sam took it all in, the smell of the air, the look of the sky, the earth he was laying on. He glances one more time at the woman.

“I’m an Angel, but not of death. You must understand why I can’t help?”

“I’m an Angel of Destiny. And this is not the way your destiny was supposed to end. ” She said as she wiped her tears away.

Sam, with no power in his body to even speak, closed his eyes and drifted deeply into deaths arm.

“If we can’t have you life, we will have you death.” She whispered as Sam Died.

The Woman, lifted her arms, waited for a decent amount of wind, and misted herself back into the ground. Never to be seen again.

Her pupils turned from a dark and hazy blue. Her head aching like she had just suffered a severe blow. Her long blonde hair blowing in the breeze. She blinked a few times and turned away from the bushes she suddenly had just found herself in front of.

Her mind running with ideas. What Happened? What was that I just witnessed?

“Gray Carmelita, is that your name?” A husky voice asked from thin air.

“Are you able to tell me what I just witnessed, I’m confused.” She continued.

A pause, Gray could hear another person breathing.

“You have it.” The voice darkened.

“Have What?” Gray asked.

“The power to see what cannot be seen.”

“Then why can’t I see you?” Gray shouted whilst beginning to panic.

“Think of me as a Guardian Angel. I’ll be watching over you. The Power exists within your eyes, beyond the pupil.” The man explained.

Still unaware of everything that was happening, Gray felt like she understood, like all of sudden this kind of phenomena happened all the time. Maybe it did?

“Ok” She whispered as she glanced back at the bushes.

Glancing back in the direction of where the voice had been coming, she anxiously awaited another reply.

“You have the power to see anything, your Friends darkest secrets, Humans thoughts, Even things beyond this world, just like you witnessed tonight. It’s the power of Focus Gray, And you sweetheart, well lets just say life as you know it, will never be the same.”

The voice seemed distant with the last few words, like it was disappearing.

“Focus?” Gray whispered to herself.

The night turned into the day, and Gray felt normal, like everything in her life was falling into place. She brushed her hair over her shoulder and begun to walk.

The world itself in its own little way, felt brand new. Something’s are often hidden and hard to see, people’s actions, often hiding their inner truth. All can be discovered with her power. All it takes is Focus.

Heartless don't like summaries... find yer own meaning!!!
Trying To Say Im lost with words on what to say, / I cant express why I feel this way,...