Starbound:Echoes of a Swansong - Chapter 1

Two humans slowly come to terms with the loss of their planet and loved ones as they're pulled into the chaos of survival and alien civil war. 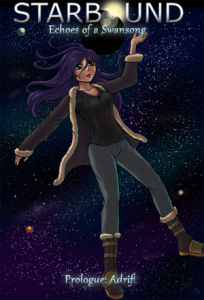 Why am I alive? Cold, distant stars floated lazily through Bailey's field of vision. Slowly, the little pinpricks of light turned into a vague haze as the interior of the transport vessel's cockpit fogged with condensation. Why did I survive just to die out here? The condensation froze quickly into patterns of hoarfrost, but Bailey couldn't even bring herself to shiver. She was too numb with cold and grief and shock. Death was a certainty; it was only a matter of how long.

Earth was gone. She'd watched it happen. She'd seen that terrifying tentacled creature erupt from the planet. She'd watched her comrades crushed, strangled... ripped apart. It was all such a blur, she had to close her eyes and concentrate to make sense of it. She wished now that she hadn't run, hadn't escaped in the downed transport ship- that she hadn't had to drag the pilot's mutilated corpse out of the cockpit first. His blood was still staining the seat , soaked and dried into her warm clothes. Yes... it would have been so much easier to die there, quickly, than to freeze to death or run out of oxygen here in the lifeless expanse of deep space.

She had never felt so utterly isolated in her life. No matter where she had gone, both on Earth and off, she'd always gone with the knowledge that people waited for her back home, whether she wanted to see them or not. She'd spent so much of her adult life trying to get away from so many people, only to wish more than anything to be with them now that they were gone forever. Mom... Dad... David... I'm so sorry. Tears wouldn't come. The sorrow faded quickly into a void of emotion, as if it, too, were sucked into the oblivion of space.

The slowly blinking blue light on the dash changed to yellow, a shrill alarm needlessly alerting her that she had only an hour of oxygen left. The ship, already damaged, was never meant for lengthy deep space travel. Without a planet or a larger ship to dock with, there was little she could do but turn the alarm off, take what could be her last deep breath, and hope to fall asleep so that her end was peaceful.

She was starting to fade when the communications system chirped an inappropriately cheerful note, signaling that she was being hailed. She was confused at first, delirious from lack of air and unfamiliar with the ship. She was no pilot, to be sure. Mere luck had gotten her this far.

With growing realization, she smacked buttons on the console; any buttons. With no fuel and no life support, there wasn't a whole lot left for her to screw up, anyway. An eternity later, her finger lighted on the right toggle and a voice filtered statically through the speakers.

“-To transport, do you read? Is anyone there? Over.”

“I'm here!” she cried, her voice hoarse and weak. “Get me the hell out of here, please...” She hated how pitiful she sounded.

“This is Letheia freight ship Crusca. Standby for pickup.”

Why You Are Applying General, Original Comics, Young Adult Male (18-40)