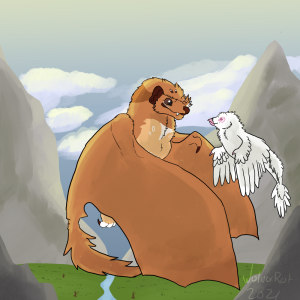 Sweetheart, the sand Common Chiroptra, flew around the snowy, desolate landscape. She diligently looked around for any stranded sentient creatures, people, or stryx. Others in the rescue rotation before her collected most of beings that needed assistance. Good thing too as her body stung from the cold wind and hours of flying around. She looked back to check on her loyal albino Tetrao Microstryx, Eensy, who was still in tow but seemed unusually quiet.

"We're going to land and start a fire before heading home." She told Eensy, "Our rotation is almost over. I don't think we're going to find anyone."
Eensy chirped and seemed excited. The juxtaposition with his mood change concerned Sweetheart, he must be so tired and cold.

They found a nearby cave system that was often used as a make-shift camp site for those in the know. The Chiroptra landed first, and her microstryx positioned himself on her back. Eensy snuggled himself into his stryx's fur. He was shivering. Sweetheart grabbed a few logs at the entrance left by the courteous previous campers. She would start the fire to keep her little one warm while she would supply new logs for the next campers.

She positioned the wood in the fire pit and taking a few steps back as she breathed in. She extended her wings to keep the ever curious Eensy back. With a mighty exhale she lets out a stream of well controlled fire breath. The campfire was lit and the cave began to heat up. Eensy seemed more content and comfortable. The Chiro would stay for only a moment while she warmed herself up, grab some wood to replace what she took, and go home.

"H-hello? Can I come in?" The duo heard a voice coming from the entrance of the cave.
The Chiro whipped around to see a Velvet Casua, beautiful gold geode markings shining in the snowy sun. He seemed extremely nervous as well cold, drawn into himself and shivering. Eensy chirped angrily and spread his wings as if to guard the campfire.
"Yes, please, come in." Sweetheart nodded enthusiastically before shooting her selfish little one a look.
Eensy backed down and settled back in on the far side of the campfire, pouting.
"He's still very young" Sweetheart assured the the new camper, "This is actually his first mission with me. We're looking for anyone that needs assistance with the recent snow fall. Do you need assistance?"
"Actually, yes." The Casua said, taking a seat opposite of Eensy. "I came here as a last ditch effort to survive the night."
"I'll radio in while we warm up, then I have to collect wood but you can stay here with Eensy." The bat informed, "I think I'm a little too small to carry you back myself."
"Does your team know where this place is?" The Velvet stryx watched Eensy wander around the cave, seemingly hunting small little creatures in the dimmer sections.
"Yes, this is actually one of our meet up points." The Chiro assured, "I'm Sweetheart by the way, I apologize for not mentioning that sooner."
"Libertine." Her new friend said, "Pleased to meet you. Especially in a time like this."
"Oh I think I've heard of you before." Sweetheart's eye's brightened before looking rather stumped, "I can't remember where"
"Was it from a lady stryx?"
"Yeah. Yeah I think so?"
"I thought so." Libertine chuckled proudly, pointing a claw at his gold geode markings.
Sweetheart rolled her eyes with a chuckle, happy that he was comfortable and well enough to make a little banter, "Of course."
"And you have chicks -er I mean pups?" Libertine asked
"Just Eensy." She pointed to the Microstryx who was now munching on a small mouse. He was puffed up at the attention, selfishly guarding his kill, "I think I may be sterile."
"Oh I'm sorry." Libertine said, "I didn't mean to bring up anything."
Sweetheart shrugged, "No, it's okay. I may adopt a little dracostryx one of these days. Right now Eensy is all I can handle."
Libertine nodded and was obviously relieved, "He's certainly a feisty one."

The Velvet Casua watched the Microstryx as Sweetheart radioed in their position. Her voice faded into the background as he watched the little albino bird skillfully hunt down rats. As he dispatched one, he seemed to turn is attention to a shiny rock in the cave. He danced around it, wings spread, pecking diligently at it. A small bit chipped out from the rock, which caused him to victoriously dance and chirp. Libertine rubbed the geode marking on his neck, uncomfortable but entranced at the sight. The two were definitely survivalists and this little Microstryx certainly had a promising career ahead of him.

"Okay-"
Libertine jumped as he turned his attention back to Sweetheart, causing the bat to also jolt and puff a little startled smoke from her nose.
"Okay," Sweetheart continued, "My team will be here in fifteen minutes. They said not to worry about the logs and that they'll replace them. We'll all get a little medical attention and some food. You'll have shelter and can leave when the storm passes. They seemed concerned about your exposure to the elements, so you can't leave until they give you the okay."
"Thank you Sweetheart." The Casua said with relief, You're a life saver!"
"Don't mention it, glad we found you." The bat said, "We'll have to hang out again."